Twitter has disclosed it’s facing a potential fine of more than a hundred million dollars as a result of a probe by the Federal Trade Commission (FTC) which believes the company violated a 2011 consent order by using data provided by users for a security purpose to target them with ads. In an SEC filing, […] 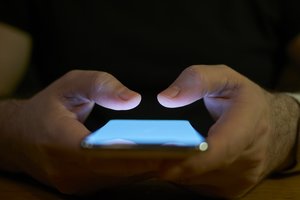 The FTC has been investigating Twitter over the use of personal data for ad targeting since October last year, the social network itself revealed in a filing with the Securities and Exchange Commission. According to the document, the Commission is lo...

Investigation could cost the company $250 million. 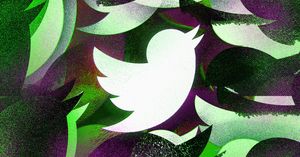 Illustration by Alex Castro / The Verge Twitter said that the Federal Trade Commission may soon fine it up to $250 million for improper use of users’ phone numbers and email addresses. The potential fines would come for violations of Twitter’s 2011 agreement with the FTC to no longer mislead consumers about how it protects their personal information. Between 2013 and 2019, Twitter used phone numbers and email addresses provided “for safety and security purposes” to help target ads. Twitter disclosed the practice back in October, saying that it was done “inadvertently” and called it “an error.” The FTC evidently believes that Twitter misled consumers by not disclosing that their data may have been used in this way. Twitter says that the commission sent a draft complaint on July... Conti...

Donald Trump: US Treasury should get cut of TikTok deal 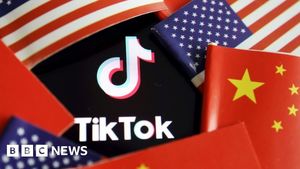 The president's comments come after Microsoft said it is in talks to buy the app's US business.

What's going on with TikTok? 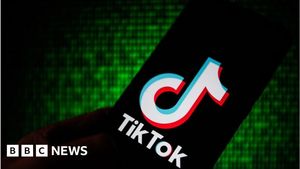 Microsoft confirmed it wants to acquire TikTok after President Trump threatened to ban the app.

Donald Trump is demanding the U.S. government somehow get a juicy cut of any deal for Microsoft to buy Chinese-owned video app TikTok—or else. Read more...

What Microsoft should demand in exchange for its “payment” to the U.S. government for TikTok

In one of the crazier news stories (and in 2020, that is saying something), President Donald Trump said today during a media availability that in order for the U.S. government to sign off on a potential Microsoft/TikTok deal, “a very substantial portion of that price is going to have to come into the Treasury of […] WhatsApp is rolling out a new way for users to fact-check forwarded messages for misinformation, after several months testing the new feature . From today, messages that have been forwarded through a chain of five or more people will display a magnifying glass button alongside them in the chat thread. Users who tap the button will be asked if they want to search the web to try and find news results or other sources of information about the content they have received. WhatsApp says the feature works by allowing users to upload the message via their browser without WhatsApp ever seeing the message itself. The ability is being piloted starting today in Brazil, Italy, Ireland, Mexico, Spain, the U.K. and the U.S. for everyone on the latest versions of WhatsApp for Android, iOS and WhatsApp ...

WhatsApp, one of the most popular instant messaging platforms on the planet, has rolled out a new feature in select markets that makes it easier for users to verify whether the assertions made in messages they have received on the app are true. The Facebook -owned service has enabled users in Brazil, Italy, Ireland, Mexico, […] 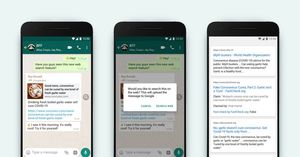 Tapping the magnifying glass icon searches for the contents of the message. | Image: WhatsApp WhatsApp is piloting a new feature that lets users quickly search the contents of viral messages to fact-check misinformation, the company has announced . Starting today, a magnifying glass icon will start appearing next to messages that have been forwarded through a chain of five or more people. Tapping it searches for the message’s contents online, with the idea being that this should reveal any common conspiracy theories or misinformation the message contains. In a screenshot of the feature released by WhatsApp, it uses the example of a viral message which claims that “drinking fresh boiled garlic water will cure COVID-19.” A web search brings up three fact-checking websites, which flag thi...

FCC Chairman Ajit Pai has decided to ask the public for its thoughts on an attempt initiated in Trump in May to water down certain protections that arguably led to the creation of the modern internet economy. The nakedly retaliatory order seems to be, legally speaking, laughable, and could be resolved without public input — […] 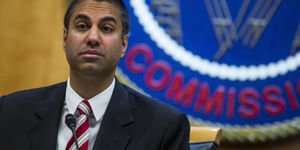 "Tell the FCC to reject this," Democrat says as agency seeks public comment.

Soon, your brain will be connected to a computer. Can we stop hackers breaking in? As the development of brain-computer interface technology speeds up, are security and privacy getting left behind?

Elon Musk's SpaceX: We now want to bring Starlink internet from space to 5 million in US Chegg is starting to see the benefits of being a platform as students in the US and abroad flock to its digital education content.

This app has made me fall in love with Android

Peli Ruck Case: These rugged cases could save you thousands of dollars

The very best protection for your fragile electronic devices.

TikTok and the Evolution of Digital Blackface 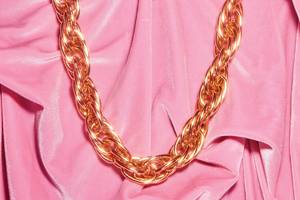 On the app, users drape themselves in the trappings of Black culture—and steal the viral spotlight. It’s exploitation at its most refined and disturbing. 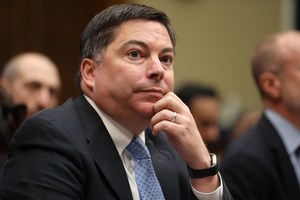 The Trump administration has changed its tune about backing what was supposed to be Mike O’Rielly’s third term as an FCC Commissioner. According to Reuters and Bloomberg, the White House has withdrawn O’Rielly’s renomination and has notified the Sena... 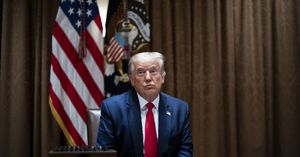 Photo by Doug Mills-Pool/Getty Images President Trump has withdrawn the nomination of FCC Commissioner Michael O’Rielly, a six-year FCC veteran who was expected by many to be renewed for a third term, as first reported by Reuters . The withdrawal comes less than a week after Sen. Jim Inhofe (R-OK) placed a hold on the nomination over concerns about O’Rielly’s position on a recently approved terrestrial 5G network. The conflict centers over a controversial 5G network recently approved by the commission. The proposed network would operate on the L-band spectrum traditionally utilized by radar and GPS, operated by Ligado Networks as a low-power terrestrial system. In its proposal, Ligado pledged to report its base stations and operating parameters to avoid any interference with... Continu... DigiTimes issued a report today highlighting Apple's apparent efforts to build a supply chain consisting entirely of China-based makers in order to manufacture iPhones specifically for the Chinese market. The assessment is based on recent aggressive moves by Apple suppliers Luxshare and Lens Technology to acquire metal chassis plants operated in China by Taiwan-based makers, a strategy that the US tech giant has reportedly been encouraging. Luxshare, the largest assembler of AirPods , has newly joined the iPhone assembly chain by acquiring lower-end ‌iPhone‌ production lines in China from Taiwan's Wistron, the sources said. To further expand its presence in the ‌iPhone‌ supply chain, Luxshare also has been keenly seeking to take over metal chassis plants in China from Taiwan-based firms... 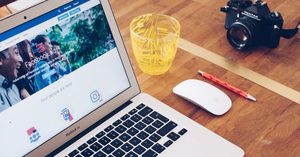 Facebook has faced a lot of criticism over the years for failing to moderate hate speech. Its policies have come under increasing scrutiny in recent weeks thanks to the Stop Hate for Profit campaign. Started by civil rights groups in the US, the campaign has led to some of Facebook’s biggest customers pulling their ads from the social media platform for the month of July. As much as 99% of Facebook’s US$70.7 billion (£55 billion) in revenues come through advertising and the boycott initially resulted in an 8% knock to Facebook’s market value (amounting to US$72 billion). Yet, even with… This story continues at The Next Web Or just read more coverage about: Facebook 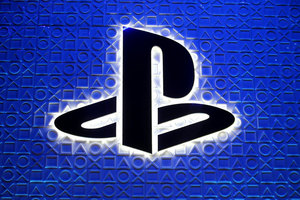 Unsurprisingly, people have spent a lot of money on video games during the coronavirus pandemic. In its latest financial earnings, Sony reported that 91 million PS4 games were sold during the three-month period leading up to June 30th, 2020. That's a... 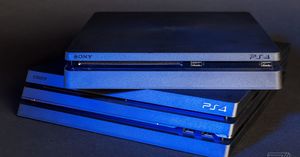 The PlayStation 4 era may be winding down, but people are playing their consoles more than ever at home. Sony just announced as part of its first-quarter earnings that despite a 22 percent decrease in sales of hardware and packaged games, digital software sales are up 83 percent year-on-year, bringing in revenue of 395 trillion yen ($3.72 billion). At 599 trillion yen ($5.65 billion), total PlayStation revenue was 36 percent higher than the same period last year and was the highest for any April-June quarter in PlayStation history. More than 112 million PS4 consoles have now been shipped worldwide, and Sony has nearly 45 million PlayStation Plus subscribers. Sony cites sales of The Last of Us Part II and also calls out Ghost of Tsushima... Continue reading…

Slated to begin operations by year-end, the Asian Institute of Digital Finance will aim to link up research, education, and entrepreneurship and pool expertise across several areas including payments, cloud computing, and artificial intelligence. 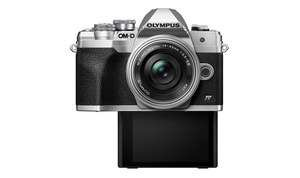 It might be exiting the camera business, but Olympus is still releasing new models. The company has unveiled the $700 O-MD E-M10 Mark IV, the latest in its line of entry level Micro Four Thirds mirrorless cameras. While it looks much the same as the... According to Reuters, a scene from The Empire Strikes Back inspired the lead researcher at the National University of Singapore to create an electronic skin that can feel. Read some of our free news pages. With a subscription you get many additional features: